Gland, Switzerland – A tiny population of six river dolphins, isolated in a deep pool in the Mekong River on the border between Laos and Cambodia, will not survive long unless Laos takes immediate action to ban gillnet fishing in the dolphin’s range on their side of the border, warns WWF. 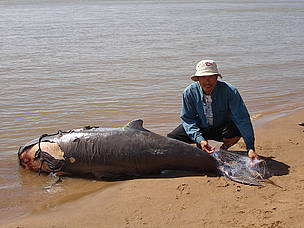 A dolphin is found dead, entangled in a gillnet
© WWF-Cambodia


According to a new WWF report, Last chance for dolphins in Laos, more than 30 river dolphins have died since 1991 in and around the trans-boundary pool, with gillnets set by local fishers identified as the main cause. From January to April this year, WWF recorded over 100 separate gillnets in and around the deep pool area and as many as 188 on one occasion.

Cambodia recently enacted a law banning gillnet fishing in the entire pool and nearby areas on their side of the border. In Laos gillnet fishing is banned only in the deepest areas of the pool on their side of the border. While the dolphins are known to reside in the 1km² trans-boundary pool in the dry season they range more widely in the surrounding 5km² area in the wet season.

“Six river dolphins are swimming the gauntlet every day as they risk entanglement and death in the many floating walls of nets,” said Gerry Ryan, Technical Advisor with WWF-Cambodia and author of the report. “Laos must immediately ban gillnets from the entire trans-boundary pool area on their side of the border, throughout the whole year, or face losing the country’s last river dolphins.”

Freshwater Irrawaddy dolphins are critically endangered in the Mekong River, where their numbers have dwindled to around 85 individuals restricted to a 190km stretch of the Mekong mainstream between southern Laos and north-east Cambodia.

“Dolphins are a major tourist attraction and contributor to growth,” said Ryan. “Dolphin-watching tourism brings in much needed income to local communities that otherwise rely heavily on fisheries for subsistence and income. It is clear that saving the dolphins also means smart development.”

The river dolphins not only bring tangible livelihood benefits, they are also an important indicator of the health and effective management of the freshwater ecosystem, and their decline in numbers may reflect a declining trend in the broader ecosystem, which is heavily relied on by local communities.

“The loss of the river dolphins would not only greatly diminish Laos’ biodiversity, it would suggest a potentially devastating decline in the health of the entire river ecosystem, and likely declines in other species too,” said Ryan. “If Laos loses its remaining river dolphins it risks losing so much more.”

While gillnets represent the most immediate threat to the survival of the six dolphins, coordinated cross-border action is also needed to end illegal fishing and the use of explosives in the area, regulate boat traffic transiting the deep pool, and cancel the proposed large concrete pier and ramp at Anlung Cheuteal, one of Cambodia’s main sites for dolphin-watching.

“The pressures on this tiny population of river dolphins are immense, but as long as they survive there is hope,” said Ryan. “Urgent and strict protection efforts are needed to keep hope for the survival of this elusive icon of the Mekong River alive, without it hope will fade very fast.”